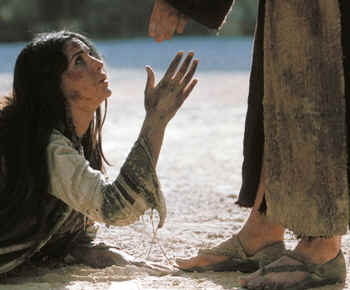 Jesus went to the Mount of Olives. But early in the morning he arrived again in the temple area, and all the people started coming to him, and he sat down and taught them. Then the scribes and the Pharisees brought a woman who had been caught in adultery and made her stand in the middle. They said to him, “Teacher, this woman was caught in the very act of committing adultery. Now in the law, Moses commanded us to stone such women. So what do you say?” They said this to test him, so that they could have some charge to bring against him. Jesus bent down and began to write on the ground with his finger. But when they continued asking him, he straightened up and said to them, “Let the one among you who is without sin be the first to throw a stone at her.” Again he bent down and wrote on the ground. And in response, they went away one by one, beginning with the elders. So he was left alone with the woman before him. Then Jesus straightened up and said to her, “Woman, where are they? Has no one condemned you?” She replied, “No one, sir.” Then Jesus said, “Neither do I condemn you. Go, and from now on do not sin any more.”

This is the Jubilee Year, a year of new beginnings and forgiveness of debts; freedom and jubilation. During Lent Christ and His Church work to free us from two things that steal our joy – ingratitude and bitterness. To regain our joy we must overcome our own complacency about the gift of our salvation from slavery to sins in our lives. We must also let go of bitterness from the past and show the same mercy and compassion toward others that we have received from Christ. Like the Pharisees and scribes in today’s Gospel, we are quick to demand strict justice for the sins of others while sweeping our own failures under the rug.

As we near the end of Lent, our sacrifices and austerity can feel burdensome and tiring. Our share in Christ’s suffering however also anticipates a share in His resurrection. There’s a saying that one cannot feast until they have fasted. It’s a human reality that when we overindulge on a regular basis we lose the ability to appreciate things. For example, kids who are spoiled with gifts constantly lose a sense of gratitude and, paradoxically, the joy of receiving a gift. Similarly, a person spared the work of chores or academic rigor loses the opportunity for the feeling of self-respect and pride at a job well done. Good work reaps satisfaction and deep joy. As the Psalmist proclaims,

Christians experience the same paradox in the life of faith. Examining our sins, rooting them out, asking for help, fasting, and praying is both tedious and sometimes tearful. However, only when we really come to grips with our weakness and sin do we experience the joy of receiving the gift of salvation from our Redeemer.

Resurrection also means newness. We need to let God create something totally new rather than holding on to a past we can’t change. God commands through the prophet Isaiah:

Christ offered the woman caught in adultery a new beginning, instructing her to “Go, and from now on do not sin any more.” Christ’s words are more than a suggestion. As the Logos, the divine Word of God, Christ effects what He says. In consequence, when He tells her not to sin anymore, He also empowers her with His supernatural grace to do just that. The weakness she had succumbed to before was not only forgiven, but replaced with strength to act virtuously. The sacraments of Communion and Confession offer the same graces. We receive both forgiveness and the strength of will to change. When we experience this gift of freedom it produces an abundance of joy and gratitude that spills over into a sharing of the same gift with others.

Pope Francis encouraged that, “There is no saint without a past, and no sinner without a future.” St. Catherine of Genoa provides one such example. She was prayerful and devoted as a child. At age thirteen she even tried to enter a convent but was turned away because she was too young. Then at sixteen she entered an arranged marriage.   Catholicsaints.info summarizes it well:

When she was twenty-six however she regretted deeply her lukewarmness and was ashamed of her current faith life in contrast to her aspirations as a child. She humbly threw herself before Christ by going to Confession and praying for Him to restore her previous devotion. Rather than perfect herself so as to be “worthy” of prayer, she acknowledged her weakness and asked Christ to save her. He responded generously by restoring her faith and, in His superabundance, granted revelations and extraordinary spiritual gifts from God that would last the rest of her life.

Christ offers us a new beginning. Let us pray for the grace to let go of the past and accept a new start.