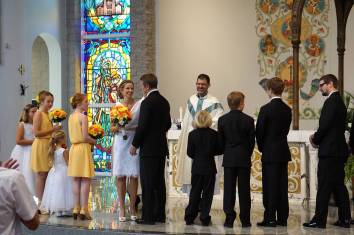 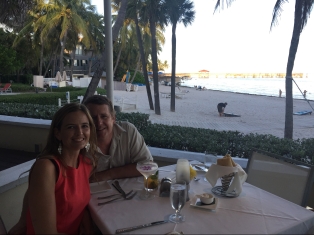 August 6th, 2017; Feast of the Transfiguration of the Lord

Jesus took Peter, James, and his brother, John, and led them up a high mountain by themselves. And he was transfigured before them; his face shone like the sun and his clothes became white as light. And behold, Moses and Elijah appeared to them, conversing with him. Then Peter said to Jesus in reply, “Lord, it is good that we are here. If you wish, I will make three tents here, one for you, one for Moses, and one for Elijah.” While he was still speaking, behold, a bright cloud cast a shadow over them, then from the cloud came a voice that said, “This is my beloved Son, with whom I am well pleased; listen to him.” When the disciples heard this, they fell prostrate and were very much afraid. But Jesus came and touched them, saying, “Rise, and do not be afraid.” And when the disciples raised their eyes, they saw no one else but Jesus alone. As they were coming down from the mountain, Jesus charged them, “Do not tell the vision to anyone until the Son of Man has been raised from the dead.”

For most of Jesus’ earthly life, He veiled His greatness.  Nevertheless, He remained God, with all of His divine attributes.  At the Transfiguration, Jesus unveiled a glimpse of His divinity to Peter, James, and John.  It was a sight they would never forget; and one Jesus needed them to see so they could be strengthened when their faith would be put to the ultimate test at the sight of His crucifixion and death.  Imagine John there below the Cross with Mary, Isaiah’s prophecy fulfilled as “His appearance was so marred, beyond human semblance” (Isaiah 52:14).  When all seemed to be lost, John must have clung in faith to the preview of Jesus’ resurrected glory.

Though divine, Jesus was also human.  The Transfiguration served to strengthen His human will as well.  Moses and Elijah appeared to Christ, conversing with Him, as all of the Law and prophecies God revealed through them were about to be fulfilled in Jesus’ suffering.  When “His Hour” finally came, agonizing in the Garden of Gethsemane as His fate approached, Jesus could be strengthened by the meaning of His sacrifice and the redemption it would bring upon all those He loved.

We too sometimes experience these Transfiguration moments – both as a disciple of Christ, and in our own personal lives.  Some people describe them as “conversion moments” which may occur through a major life event, the witness of another person’s life, unexpected mercy received, or a deep encounter with God in prayer.  While they aren’t the sum of a person’s faith, they do strengthen one’s loyalty to God and conviction of His truth and love.  They help a person persevere through those times when faith can be tested – either dryness in prayer, personal suffering, or persecution.  When tempted to abandon what we can’t see for what we can, we can think back to those Transfiguration moments and choose to stay with Christ at the Cross, convinced that He will conquer and we will one day see His resurrected form again.

These Transfiguration moments can occur in our vocations and jobs as well.  We need to treasure those moments of confirmation and joy to push through normal frustration and tedium.  The first time I held each of my children after they were born is etched forever in my mind and heart.  This got me through days where they all had the flu and I felt like all I did in one day was change diapers.  When my oldest picked me up from the airport, I marveled the whole time at how grown up he had become.  A week later, when he lost his keys and I had to invest multiple hours into looking for them, then rearrange my plans for the day to be with him while it got towed to a dealership and re-keyed, I reflected back on those two moments I just mentioned. My frustration was changed to peace as I thought, “My growing up, sweet baby, still needs me.  It might be a tedious day, but it’s worth it.”

Two weeks ago I was blessed to marry a dear friend of mine (thus the absence of posts these last two Sundays, and the new last name!).  We have a blended family and hesitated to leave for a honeymoon.  In the end, we decided to go.  We knew we needed to make memories that would last through tough times.  We also foresaw that after the hustle and bustle of planning a wedding and moving in, we would need to take time to remember our love and appreciate one another without distractions.

We forget so easily.  Today, let us remember the Transfiguration moments in our faith, our relationships, and our work, so we might deepen our appreciation for God’s active love in our lives.

2 thoughts on “Moments to Remember…A Reflection on the Transfiguration”