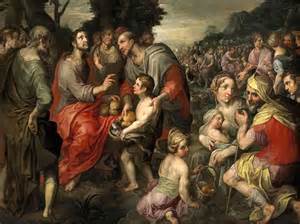 “Jesus went across the Sea of Galilee. A large crowd followed him, because they saw the signs he was performing on the sick. Jesus went up on the mountain, and there he sat down with his disciples. The Jewish feast of Passover was near. When Jesus raised his eyes and saw that a large crowd was coming to him, he said to Philip, “Where can we buy enough food for them to eat?” He said this to test him, because he himself knew what he was going to do. Philip answered him, “Two hundred days’ wages worth of food would not be enough for each of them to have a little.” One of his disciples, Andrew, the brother of Simon Peter, said to him, “There is a boy here who has five barley loaves and two fish; but what good are these for so many?” Jesus said, “Have the people recline.” Now there was a great deal of grass in that place. So the men reclined, about five thousand in number. Then Jesus took the loaves, gave thanks, and distributed them to those who were reclining, and also as much of the fish as they wanted. When they had had their fill, he said to his disciples, “Gather the fragments left over, so that nothing will be wasted.” So they collected them, and filled twelve wicker baskets with fragments from the five barley loaves that had been more than they could eat. When the people saw the sign he had done, they said, “This is truly the Prophet, the one who is to come into the world.” Since Jesus knew that they were going to come and carry him off to make him king, he withdrew again to the mountain alone.”

A friend of mine has a gift for including others and making them feel a part of things. In observing him these past few years I realized that he does this by asking whoever is around for help with whatever project or task he is doing. If he is working in the garage or the yard and you happen by, be assured that a tool will be handed to you or a job assigned. His talent is most evident in the way he even includes his kids and their friends. The result is not the feeling of slave labor however, but rather the experience of being important, included, and an integrated part of what’s going on. It forms bonds and knits everyone together. The truth is, he doesn’t always need help, but he does enjoy people and being together.

Christ’s miracle in this passage reveals what I find to be one of the most remarkable mysteries of our faith: that God includes us in His work of salvation. It wouldn’t surprise me that Christ did something amazing. It does surprise me when He does something amazing with a small contribution from me.

When we look at the needs of the world, we can be overwhelmed like Philip. Like Andrew, we may consider what small resources are available to us but in contrast to the need they seem pointless. The critical question for you and I is whether we will make the contribution anyway, with faith that Christ can work wonders even today.

If the contribution is small it can seem worth the gamble and it makes us feel like good people. However, in the case of the child in this passage, it required all the food he had. Our faith is most tested when our contribution requires real sacrifice and real risk.   The boy could have reasoned that it would be imprudent to offer so much when so little could seemingly be achieved.  Children usually have more hope than prudence however, and in this case it turned out to be a blessing.  The boy didn’t know how his small contribution would help, but he trusted Who he gave it to.

In his spiritual classic, Abandonment to Divine Providence, Fr. Jean-Pierre de Caussade exhorts us to continue to make these acts of faith with confidence because Christ still works miracles today. He writes,

Blessed Cardinal John Henry Newman also urged that our faith is in some ways measured by our risk.  He challenges us to consider how much we have “ventured,” or bet, on Jesus being Who He says He is; much like the boy who trusted the person of Jesus more than the mathematical ratio of loaves to people who needed to be fed.

Faith requires a risk for a reward that can only be calculated supernaturally. According to Christ’s math, five loaves and two fish can feed five thousand people with leftovers to boot. Like my friend, Christ does not necessarily need our particular contribution, but He does desire us and working with Him results in an experience of being bonded, knit together, and the satisfaction of being a part of something amazing.