om Take Time for Him: Simple, Soulful Gospel Meditations to Ignite the Busy Person’s Spiritual Life  Get your own papercopy from Amazon!

Remember to rate and review it!

The Ascension of the Lord

Acts of the Apostles 1:1-11 and the Sunday Readings

Christ is so humble in His Incarnation that we, like the apostles in today’s passage, can forget the awesome reality of His divinity.  For most of His earthly life, Jesus chose to veil His divinity.  He humbly lived among us as one of us, choosing a life of poverty and sacrifice. Even when condemned to crucifixion, He told Pilate that He was not powerless in the situation (cf. John 18:36). Jesus chose to be sacrificed to save us. He could have saved Himself, as those taunting Him urged, or defended Himself as Pilate suggested, but love kept Him on the Cross. Christ came down from heaven to be a ransom for our sins. 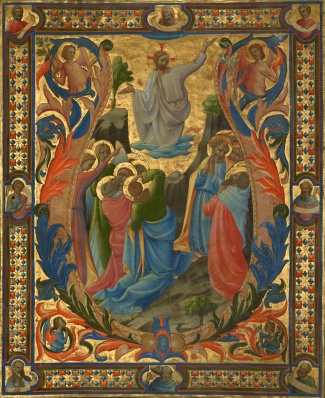 At the completion of His mission however, He ascended back to heaven to reign in glory as the Son of God. Because of His humility during His earthly life, we overlook at times His divine dignity and His rightful place in Heaven. Beyond anything we could have imagined, He promised to prepare a place for us there as well!

Jesus kept surprising His apostles and He continues to surprise us. They imagined the savior as someone who would overpower their persecutors and restore things to how they used to be during the best time in Jewish history. It took a while for them to accept that He would die and rise again.

Confused and scattered at His crucifixion, they rejoiced in awe at His resurrection. Overwhelmed with joy that Christ was alive, and excited by His show of power they still imagined that they would enjoy the booty of His victory in an earthly kingdom. “Finally”, they must have thought, “now He will bring to fruition all our hopes and desires.” Thus, they ask, “Lord, are you at this time going to restore the kingdom to Israel?”

Jesus did not come to stay on earth however, but to bring us back to Heaven. He does not put new wine into old wine skins (Matthew 9:14-17). His kingdom exceeds our imagination. The experience the Jews had under King David provided a foretaste and glimpse of the kingdom of God. Jesus reveals that God has much more in store for us.

In order to receive the Holy Spirit and begin their new life in Christ, they had to let go of their previous hopes and plans. To rule in the Kingdom of God meant to surrender worldly power for the power of the Holy Spirit. The Spirit transforms lives with saving grace, Truth, peace, and love.  No other nation or religion has had the same universal, enduring, transformative effect, of the Christian faith. The only explanation for this miracle is the Holy Spirit.

Jesus makes all things new (Revelation 21:5). As we celebrate the Ascension of Christ into heaven, we let go of our desires for Jesus to make things how they used to be, or how we wish them to be. Christ’s physical absence grieved the apostles and we too can be grieved by the absence of tangible comfort and security. However, by letting Jesus ascend to Heaven, they received Him back even more intimately and powerfully in their very souls on Pentecost when they received the Holy Spirit.

Christian discipleship means sharing in Christ’s death that we might also share in His resurrection. But it doesn’t stop there. Discipleship means accepting the unanticipated, unimaginable “new” that Jesus has for us. He wants so much more for us than we can plan and blesses us with so much more than we deserve. By surrendering our grip on control in our Christian walk, we get to live in the freedom of gift. There are no words to describe this freedom and joy other than surprise; or as John puts it: “From his fulness have we all received, grace upon grace” (John 1:16 RSV).