Jesus said to his disciples: “I have come to set the earth on fire, and how I wish it were already blazing! There is a baptism with which I must be baptized, and how great is my anguish until it is accomplished! Do you think that I have come to establish peace on the earth?  No, I tell you, but rather division. From now on a household of five will be divided, three against two and two against three; a father will be divided against his son and a son against his father, a mother against her daughter and a daughter against her mother, a mother-in-law against her daughter-in-law and a daughter-in-law against her mother-in-law.”

Imagine someone else saying the same words as Jesus did.  You might accuse them of not being very Christian.  Isn’t Jesus the Prince of Peace?  Isn’t He the nicest guy there ever was?  Aren’t Christians supposed to be nice people? Yet, Jesus exclaimed with great passion His eagerness to set the world ablaze.  This doesn’t seem to fit the sandal-wearing, nice, historical moral teacher image our culture likes to portray Jesus as.

Jesus does bring peace, but not a superficial conciliation. He came to defeat sin and redeem mankind, accomplished through His own baptism of the Cross, one that caused Him great “anguish until it is accomplished.” Fire purifies and destroys.  Christ came to set fire to sin, to destroy its corrupting influence in our lives, and to make room for life in God.  That battle begins within ourselves and extends to sin outside ourselves.  Purification can burn, but at the end of the process one feels liberated and empowered. To ignite this fire and make our purification possible, Christ knew He had to suffer and die first – something that caused Him distress as He waited in anticipation.

As disciples of Christ, we share in both His rewards and His suffering.  Christ’s words about causing division seem shocking.  Isn’t He supposed to bring unity and harmony? Jesus offers unity, but not everyone accepts it.  Note that although Jesus often ate with sinners, not every sinner chose to eat with Him and several found His witness challenging enough that they tried to silence Him altogether by crucifying Him.

I often quote G.K. Chesterton who said, “The Christian ideal has not been tried and found wanting. It’s been found difficult; and left untried.”  At the fork in the road therefore, where one m 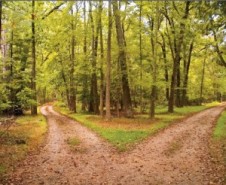 ust choose the path of discipleship or the path of least resistance, Christians must resolve and accept that as they walk to the left after Christ, some of their closest companions may walk to the right instead and their paths will separate.  Although Christians, like Christ, ought to keep the door open to those friendships, oftentimes living our faith can mean losing some relationships.  Jesus is Goodness, Truth, and Love.  Yet, He was rejected by many.  As we strive to be more Christ-like, we have to prepare ourselves for the same experience.

Even in the Old Testament, authentic prophets consistently experienced rejection and suffering.  The community they came to help change would pressure them to conform instead.  When God’s prophets refused, they found themselves exiled or running from death threats.  The first reading for this Sunday’s liturgy provides an evocative image of this from the life of Jeremiah:

“And so they took Jeremiah and threw him into the cistern of Prince Malchiah…There was no water in the cistern, only mud, and Jeremiah sank into the mud.” Jeremiah 38:6

This image strikes me because of the several analogous experiences I can think of in my own life.  Jeremiah acts in truth and love only to be thrown into a pit.  The mud makes the image even better as a symbol of the depressive reality of ones you love rejecting Christ (and you) in favor of persisting in their sins.  When Jeremiah “sank into the mud,” I am reminded of the feeling of helplessness and despair that can discourage me in these moments. Thankfully, Jeremiah did not remain in the mud forever, Jesus’ death was followed by His resurrection, and God will lift us up too.  David expresses this in Psalm 40:2

“The LORD heard my cry. He drew me out of the pit of destruction, out of the mud of the swamp; he set my feet upon a crag; he made firm my steps.”

Walking the path of discipleship may take you down a different road than some of the persons you love.  You might experience the pain of division and loss, not because you didn’t invite them along but because they refuse to come with you.  This fork in the road can come in many different forms at different times in our lives.  Choosing between following Christ and following someone we love is as painful as fire.

Our contemporary culture adds even more pressure.  It seems more rare these days to find people who can be friends even though they have different views and beliefs. Instead, the attitude appears to be that one must condone the decisions of another or they can’t be friends.

Discipleship may be difficult but in the end Christ conquers all.  He can provide the guidance to achieve the tricky balance of loving others without condoning sin, as well as the humility to be receptive to the hard truth about our own sins a Christian friend might challenge.  Every person must make a choice and, praise be to Christ, He provides us with the grace and the guts we will need to follow Him no matter the cost.

Have you had a similar experience?  If you’d be willing to share, write a short account of your fork in the road in the comment section below!

“that you and I may be mutually encouraged by one another’s faith, yours and mine.” Romans 1:12

One thought on “The Fork In The Road For Every Christian”